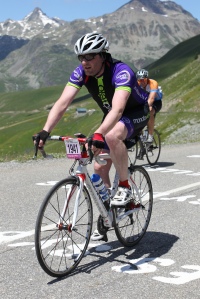 L ‘etape du tour starts. It helps to have done this before. I can enjoy the start and switch modes as soon as the work starts. On this occasion it’s at 20km. Le col da Madeleine . I allow the adrenaline to drain away and concentrate on slowing down and ensuring my heart rate stays below 155. The early slopes are steep and the road is crowded.  It is difficult to keep the effort low at this gradient. It amounts to riding as slow as I can without the bike falling over.

Down offthe Madeleine then on to le Col de Glandon. The last 3km are agony with the gradient almost unbearable. Then down again befor a short rise up to le Col de Croix de Fer. I took the oppurtunity to grease my pedals as the squeaky noise I had been getting all year had returned. This was to take on greater importance as the day went on ( and even greater importance as the week went on – edited 11th july).

I rested on the technical descent narrowly missing a crash when an inside pedal on a rider hit the ground and brought him down as he cut the apex on a tight hairpin. I then took a sharp right for Col du Mollard. Immediatly a sign said 5.6Km to the Summit. easy right? wrong.  After a steady 1km I reach for a gel from my pocket and bang my left leg fell from the cleat quickly followed by my right. The hill was steep and it took three atempts to restart as I my foot repeatedly clicked out as I tried to clip in. This was to happen again 3 more times on La Toussuire. The climb itself seemed endless and I was glad to reach the top. More water as I prepared to remount I noticed several of my companions who had higher numbers arrive at the Col most did not stop and headed down ahead of me. I was determined to finish ahead of them and hoped that the fact that I had spared myself would come to my advantage. As the descent leveled out I made an effort push hard and arrived at the water stop at the  base of La Toussuire with all of the others. I debated refilling my water bottle as it was less than 20 mins since I had done so in hindsight this was ridiculous. I would take on water twice more before reaching the top.

I started La Toussuire first and my goal was to make it up it ahead of the group I started with. I pushed along mindful of how shook Hugh was after he had done it earlier in the week. He had warned that it was long and exposed. He was right about both. Initially I was slower then those varound me. I suspected that they felt this hill was easier than previous ones and wetre pushing for the finish. I felt there was time to  ‘blow out’ several times before the finish. I decided to keep myself in check until 3Km to go. One of my companions past me at speed and I resigned myself to the fact that I would not see him again- I was wrong- 6km later I saw him slummed over his bike still with 5km to go. I suffered on the hill but was passing several riders I had seen earlier in the day. I stopped for water at a fountain manned by a local who must have stood for hours filling bidons. Merci M. I later got a bottle from a spectator and continued until 3km from the finish- I threw my collected rubbish in a bin, took a comfort break and tried to straighten myself up. I was shagged but I was better than I had been on previous Etapes. 3Km to go, 2 Km to go. Le flan Rouge- More climbing and then .. BIG RING- SMALL COG and sprint to the finished- Childish but great fun