After 8 hours in the saddle I pass the Flange rouge. 1km to go. I switch to the big ring. 52-20 90rpm and 400 watts. I swallow up the last 200m. Ahead of me a rider who has been ahead of me all day meanders from side to side, his bike making little progress toward the line.  I glide past him. His distressed and disorientated head is tilted as it turns drunkenly towards me.

“I love you bendy bike”

He sighs at my Helix frame.

I cross the timing mat and look down at the town of Cortina d’Ampezzo.

In 1982 my uncle Maurice arrived at my home in his brand new Ford Cortina- I was filled with awe at its high tech luxury. The highlight was the in car coffee maker. Fresh luke warm tea or coffe in less than 47 minutes!

Today I arrive in triumph at the town named after that car. My finest day on a bike. I am in ecstacy.
My achievement matched only by the 212 riders who finished ahead of me.

Tall, athletic, with perfect poise, long blonde hair and super-tight brilliant white trousers (no VPL) and white vest. Fabio knelt on the massage table astride my right leg, his thumbs needing vigorously on a particularly tender spot on my hamstrings.Earlier he had ordered all of his colleagues to put down their healing hands and gather around my table to inspect the worst case of ‘not stretching’ he had ever seen. I lay  face down, in my pants starring at the unhoovered carpet. They all nodded knowingly. Two even took the liberty of touching the tightest hamstrings that Fabio had ever professionally encountered.

The room was 5m square with one door and no windows. There were 4 other exhausted cyclist with 4 other (less opinionated) masseuses working quietly to soothe tired muscles. At the open door 2 other men in underwear and one uncomfortable but fully dressed north American lady stood waiting their turn on the table.

The next words that Fabio uttered aloud were

‘There first thing you must do after this massage is take a bath’.

There was a audible intake of breathe in the room. I wish I could say he broke the silence by explaining that he felt it would soothe my damaged muscle. The silence continued.  I waited for the ground to swallow me up but the Fabio intervened.

He sighed in surrender, released his grip on my thigh and in one smooth gymnastic movement leapt from his kneeling position to land on his feet, legs apart to the side of the massage table.

‘I will change your orientation!’ He announced.

In an instant he turned me on my side, my face poised at his groin. He pulled my knees up and toward him, he embraced me with his left leg, securing  my legs. He laid his shoulder, arm and chest across my torso and twisted my upper half and my lower half in the opposite directions. There was a audible crunching noise.

The tension in the room about my personal hygiene vanished, replaced with a different tension. My fellow inmates were silent. Wondering if I was still alive but too frightened to intervene in case it drew Fabio’s attention to them.

Ten minutes later my relaxing complementary massage was over. I can’t recall any complements but I have to say that despite the vigour and the crunching noises it was pain free. Fabio had one parting shot however.

‘You don’t stretch! It is lucky that I found you. You would never have been able to finish. Now if I can help you every night you might have a chance of finishing in Venice.

‘No, no, no Fabio, you know nothing about Tuco!’

There are two types of people in this world, my friend. Those that quit and those that don’t quit.

And besides he didn’t find me. I found him. There was a 5 foot improvised sign in the lobby that read “FREE MASSAGES FOURTH FLOOR”

I thanked Fabio and left. There was 6 days of hard cycling left but I knew I would be finishing.

P.S. The following day while struggling up the Nuffenen pass I was a minor celebrity.

‘Your the guy that had the massage with me last night. Me and Gary didn’t think you’d start today. Are you okay? Did it hurt.? He told everyone to take a bath and that shy American lady was after you …

That man is a ‘grimpeur’, Dr Watson.

‘I have questioned your deductions a hundred times before Holmes’ declares the amiable Doctor. ‘I will not waste my breathe and your time by stating my disbelief. I simply ask that you explain your astonishing deduction’

‘I am surprised Watson that you yourself did not grasp the fact that he is a cyclist with some expertise at ascending the Haute Alps’ Holmes replies and then proceeds to explain.

‘You will note his stick thin arms and legs.Also you will note the compression socks and his narrow hips. All vital attributes in a grimpeur.’

He goes on. ‘Notice the healing scab on his right elbow , doubtless received in a fall on Tarmacadam from a two wheeled vehicle.’

‘He approaches a collection of tents surrounded by a ring of unisex Portaloos, in a metropolitan area that is brimming with lavatories- a sure indication of an impending mass participation sports event. Lastly he carries no bag and there, 15m metres in his wake is a petite lady with a gold wedding band. She is slowly making her way in the same direction burdened by a rucksack, a 60l wheely bag and a large bike box. A bicycle helmet (2 sizes too large for her) is perched upon her head and is slipping down to occlude her vision. This lady is clearly his wife who carries is luggage to persevere his legs for the challenge ahead.

‘Astounding Holmes! The man is a grimpeur and like you he is rooted in the 19th century ‘ cries Watson

I wish Jaclyn were here.

I am not the only high profile inspirational blogger who is taking part in Haute Route 2016. HR Facebook’s page recently brought this truly inspirational athlete/motivational speaker/ model and blogger to my attention. Looking at her blog Challenge Sophie I see that following a pivitol life event she decided to give up her job and now travels the world doing endurance events with the endorsement of several key brands. Truly moving and inspirational.

I plan to continue my blog as a independent voice in cycling. I too have a inspirational story of courage.

In the past I had dedicated myself to my career. I found myself working 50 hours per week, drinking to relax, I was overweight and worrying about keeping the show on the road. I was always overdrawn despite the long hours I  was working.

Then a friend said something to me that inspired great change in me.

These words changed my life and unlike Sophie’s friend he didn’t rip them off someone else (My apologies to Sophie if her friend is in fact John A. Shred who published that aphorism about ships in the harbour in his book ‘Salt from my attic” in 1928. I digress, my friend said to me

“Peter, you’re so overweight that when you fall asleep the soft tissue in your neck relaxes and blocks your windpipe. You should consider loosing weight”.

I now cycle 8 hours per week, work 50 hours per week, drink alcohol to relax, worry, I am overweight and very overdrawn because of all the money I spend on stuff for my bike.

What about this  Rapha cream and Rapha embrocation? (Paid for with my own money). Both great products.The cream protects your bits from chaffing and does smell of Provance (5/5). The embrocation does protect from harsh Irish conditions (4.9/5). One small tip though, store them separately as if the embrocation touches your genitals they tingle warmly. (Don’t think Sophie would use the word Genitals in her blog). 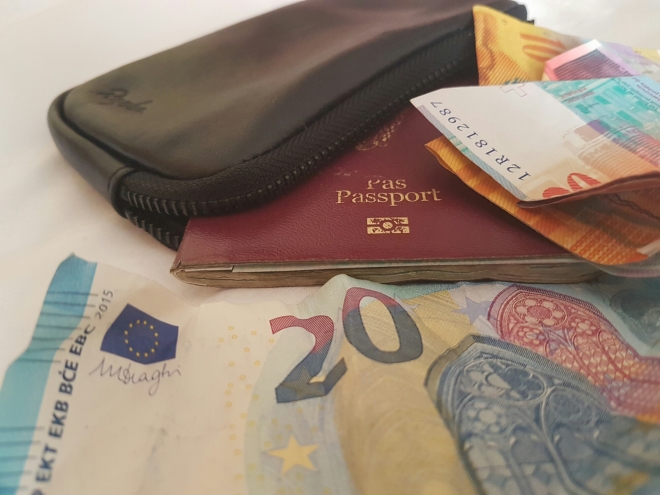 Any  cycle where you gotta pack your passport, two currencies and no rain jacket is a good cycle. Headed in to France to visit a town called Thorens that was calling out to me on the map.

Did a route on my Garmin over breakfast and 2 hours later I was up in the mountains surrounded by grazing cattle, gliding buzzards and the smell of wild flowers.

I paused at the col des fleuries to enjoy the moment when my phone beeped a message. Eir texted to inform me I was ‘now roaming’. Eir was not wrong.

Descending into Switzerland I expected to see Donald Pleasant and Mannix emerging from the wreckage of a light aircraft. I was tired and anxious to make it to Switzerland. Unlike Steve McQueen I made it across the border on two wheels without any failed bunny hops, barbed wire or drama.